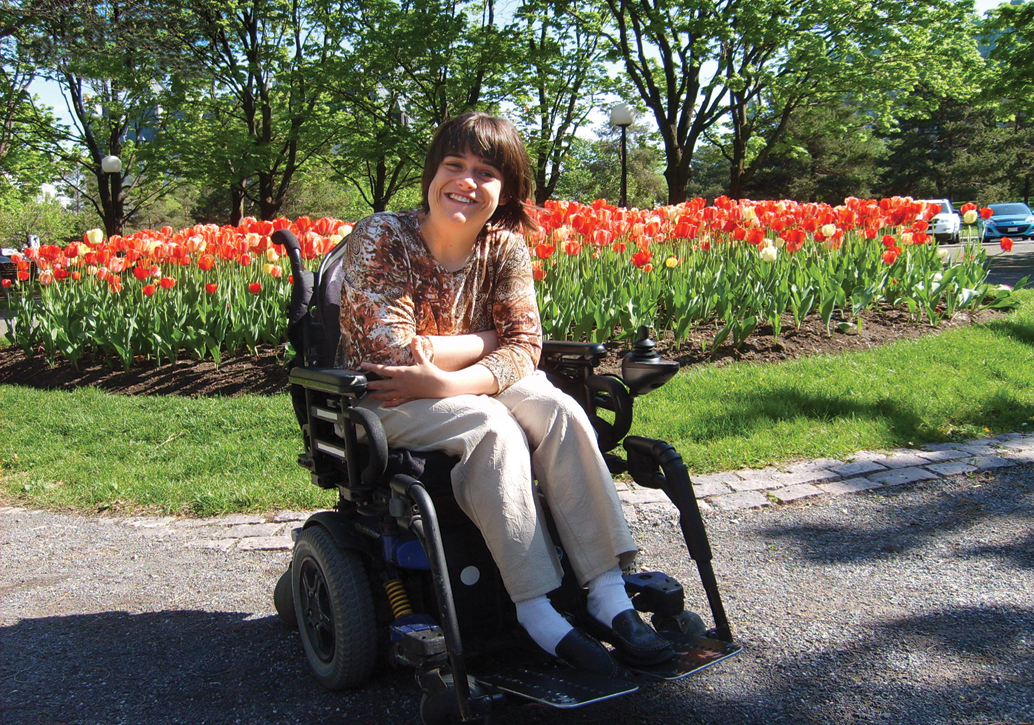 My name is Sarah and I am 32 years old. I have cerebral palsy, which affects my ability to walk (I use a walker and manual wheelchair at home, and an electric wheelchair in the community).

By Sarah Evans, with Michelle McClure

My name is Sarah and I am 32 years old. I have cerebral palsy, which affects my ability to walk (I use a walker and manual wheelchair at home,
and an electric wheelchair in the community). My disability also has an effect on my speech and fine motor control. My life with cerebral palsy has
been quite a journey—one of both challenge and joy.

I grew up in Toronto. My parents divorced when I was young and I lived with my mother and sister. They were my first support network, especially my mom. I wouldn’t be where I am today—in my own assisted-living apartment—
if not for her love and encouragement.

My early school years
I went to pre-school at Holland Bloorview Kids Rehab (which at that time was called the Hugh MacMillan Rehab Centre), where I had a lot of support from my teachers, peers and therapists. When I was about seven years old, however, I started to go to a regular school in my neighbourhood. I had a difficult time at first and lashed out in anger, even though I didn’t fully understand the reasons behind my actions. But I gradually began to feel accepted at my new school. A teacher’s aide stayed with me all day, and she really helped me to manage my challenges and academic life.

That same year saw some changes in my health. I had my first grand mal seizure, which marked the start of seven years of seizures and a lot of time in hospital. I tried various different medications in the doctors’ attempts to control them. The drugs would appear to work for a while, but the seizures always started again. On a few occasions, I had other grand mal seizures and almost died. Fortunately, the episodes generally didn’t have many long-term effects on me but, after one, my speech became more unclear, the right side of my body became weaker and I began to drag my right leg.

For the most part, however, my elementary school years were okay. I had a bit of trouble fitting in with my peers, but I had a small group of people to play with—even if there were times when I felt bullied and intimidated by them. I don’t know how I dealt with it. I think I simply believed that school was meant to be that way. It can be difficult to always hang out with the same group of people, especially as a kid. It didn’t help that I was often absent with medical appointments and spent a lot of time around adults because of all the help I needed. It sometimes felt easier to relate to adults rather than to kids of my own age.

Moving on
Throughout school, my mother was my biggest advocate. I was the first child with a disability to attend that school, so there were some things that she had to explain to the teachers.

Grade seven was a difficult year. My teacher wasn’t very understanding and treated me differently to the other students. He expected the teacher’s aide to actually teach me and give me help that should have come from him, and suggested that I wasn’t able to learn because of my disability. To make matters worse, in gym class I was put in the girl’s change room to bounce a ball with my teacher’s aide instead of participating with the rest of the class.

The situation was made even more challenging by the presence of a new principal (who was also unhelpful) and two new teacher’s aides, who replaced the woman who had been with me from grade two. My mom spent a lot of time at the school advocating for me, and some of the disability professionals I was working with also got involved to try to help improve matters with my teacher and principal. 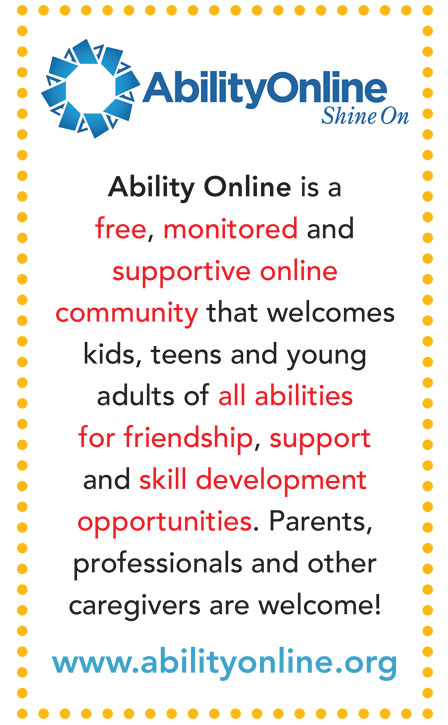 High school presented yet another challenge. There was pressure for me to attend the school in my neighbourhood, but it wasn’t accessible. I visited once for a school function with my sister and could barely fit through the doors of the library with my walker. My mom didn’t want me to have to be a pioneer again, so I ended up going to a different school about 20 minutes away that was much better equipped for people with disabilities. Again, it took a lot of advocating to get what my family and I thought was the best thing for me.

Finding strength online
I was about 13 or 14 years old when I started using Ability Online. Within this online community I met a lot of people, with and without disabilities, who gave me encouragement. One woman had cerebral palsy, the same disability as me, and was living on her own. She was an artist and had a job. She was also engaged to be married. She really was a great role model!

As I met new people, I gained confidence in myself and my ideas and discovered a love of writing. I was encouraged to pursue writing and even had some of my stories published in a couple of magazines. Furthermore, journalists who were present on Ability Online inspired me to take journalism in college.

Ability Online also provided me with opportunities to develop my leadership skills at a young age. When I was about 14 years old I became a “conference host,” a job that involves monitoring a message area, welcoming new people and keeping message activity going in that area. I am still a host (in addition to holding a few other roles) today!

I have volunteered for Ability Online for a long time. Two years ago I helped to create “Healthy Minds,” a module about mental health and disability. Once again, I find myself a pioneer in an unknown world, as no one else is dealing with disability and mental health together. But I know that by working with people who understand and support me, anything is possible!

I have been very blessed by God and my family throughout my life. I hope that I can help other young people to overcome their challenges and achieve their goals and dreams, just as I have.

Sarah Evans is 32 years old and has cerebral palsy. She struggled with mental health issues in her young adulthood. Sarah has earned diplomas in social service work and print journalism.

PreviousWhat Time is the 9:20 Bus?
NextHow to Battle Bullying 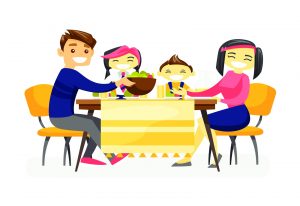 A family who eats together, stays together 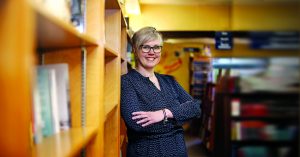 Inclusion matters for every child (disability or not) 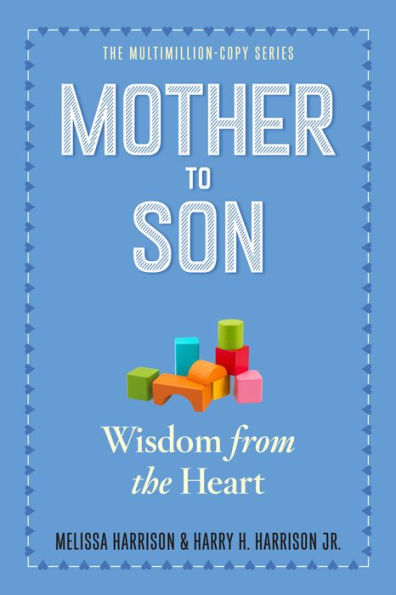 How much is that doggie in the window? 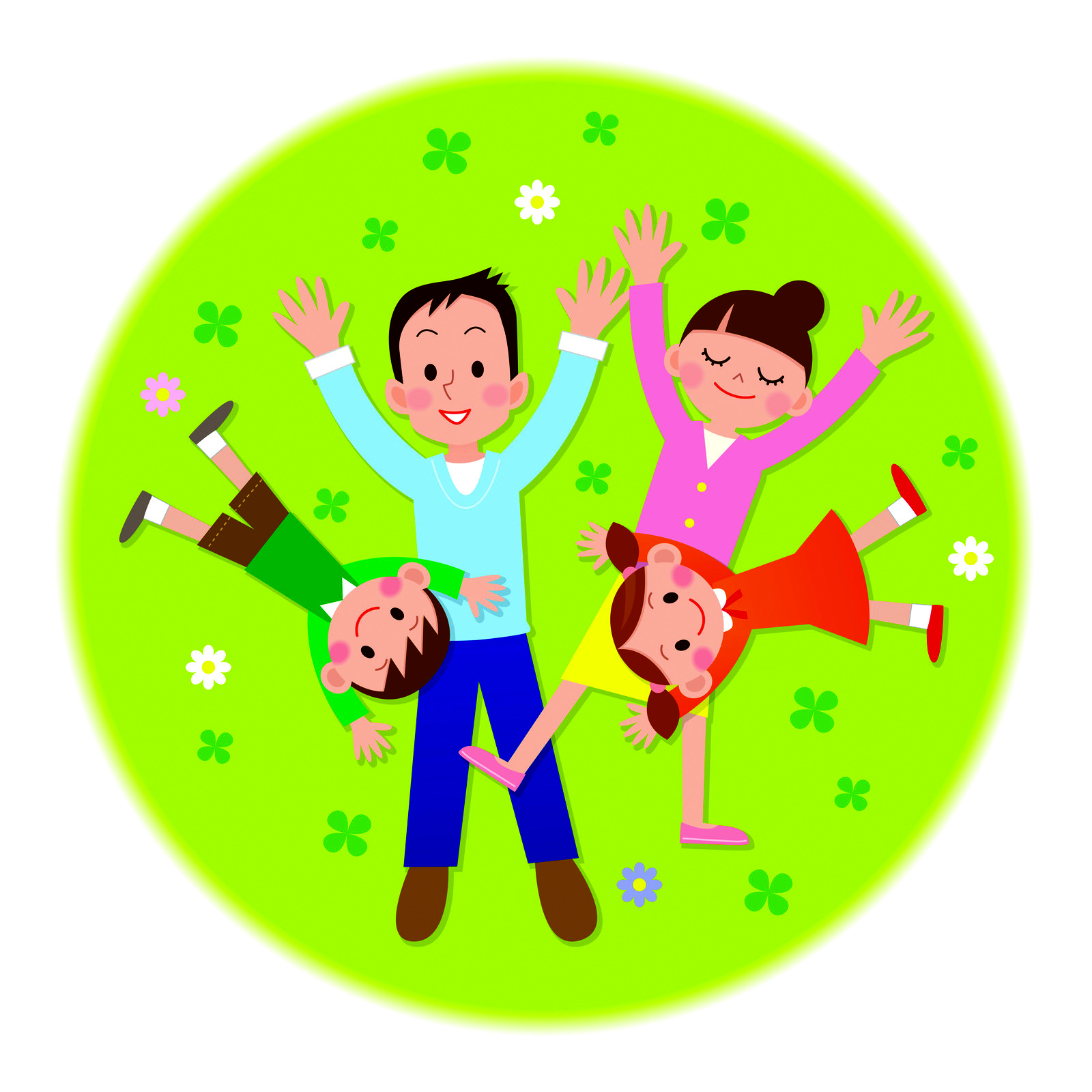 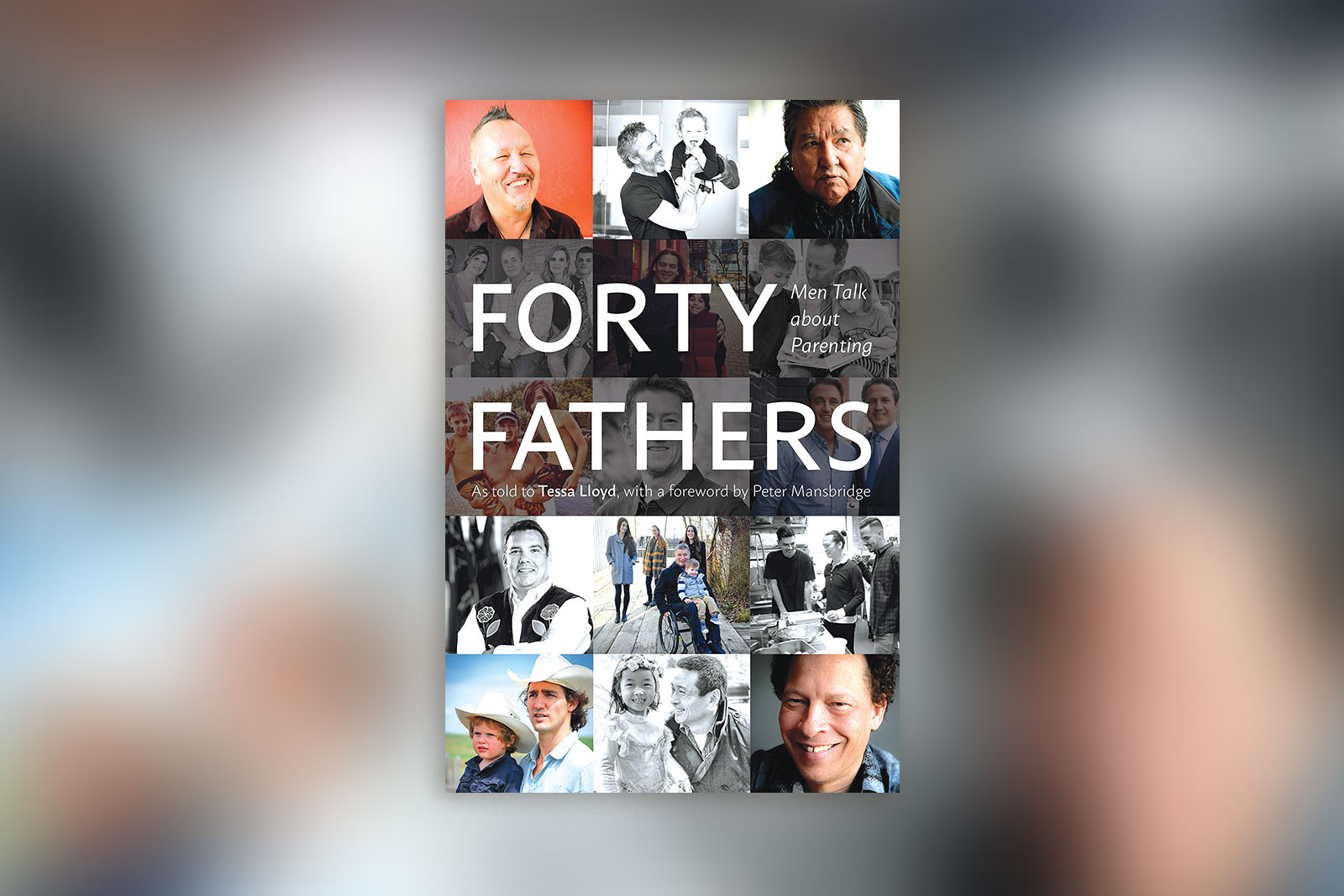 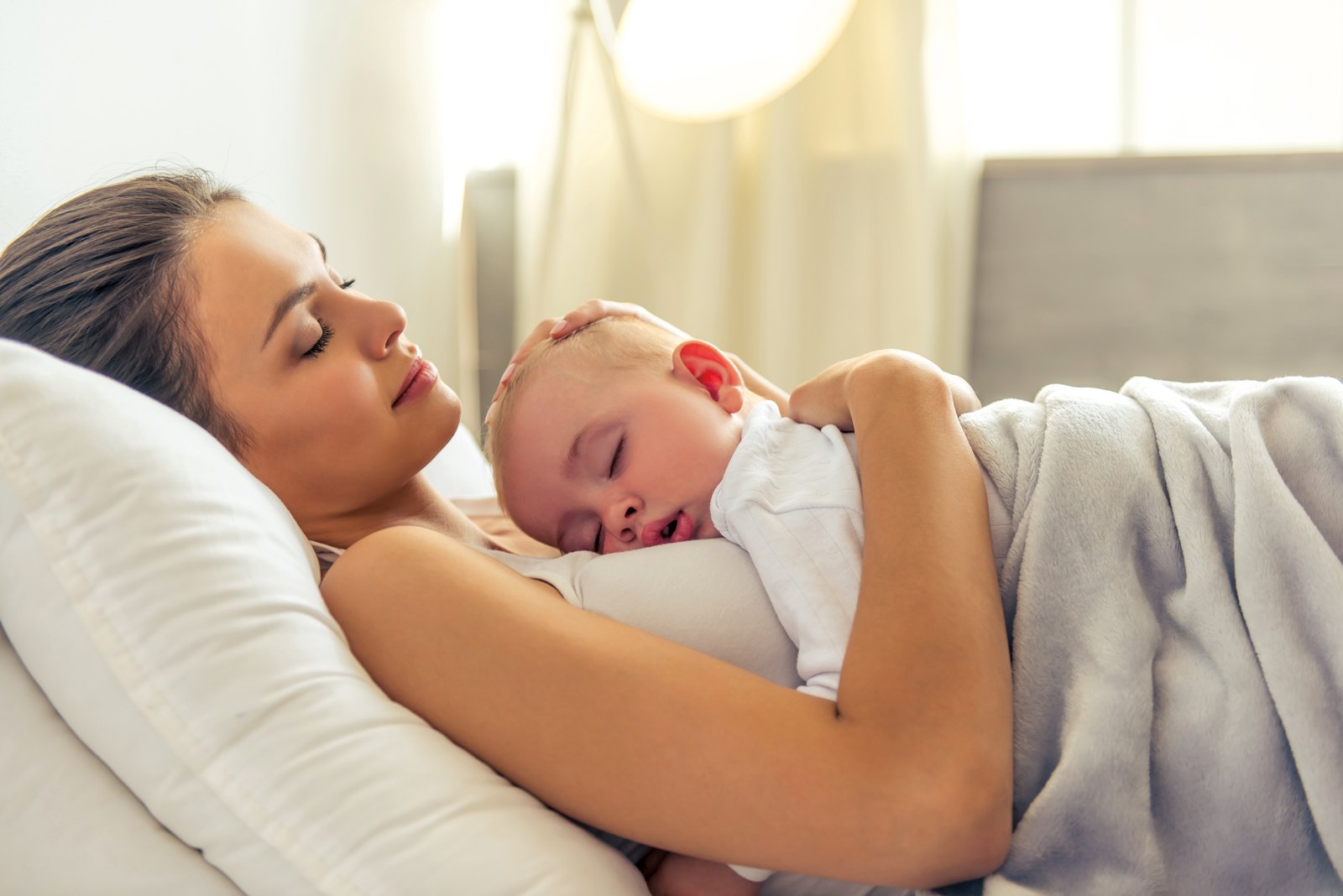 Tips and News for Parents and Caregivers