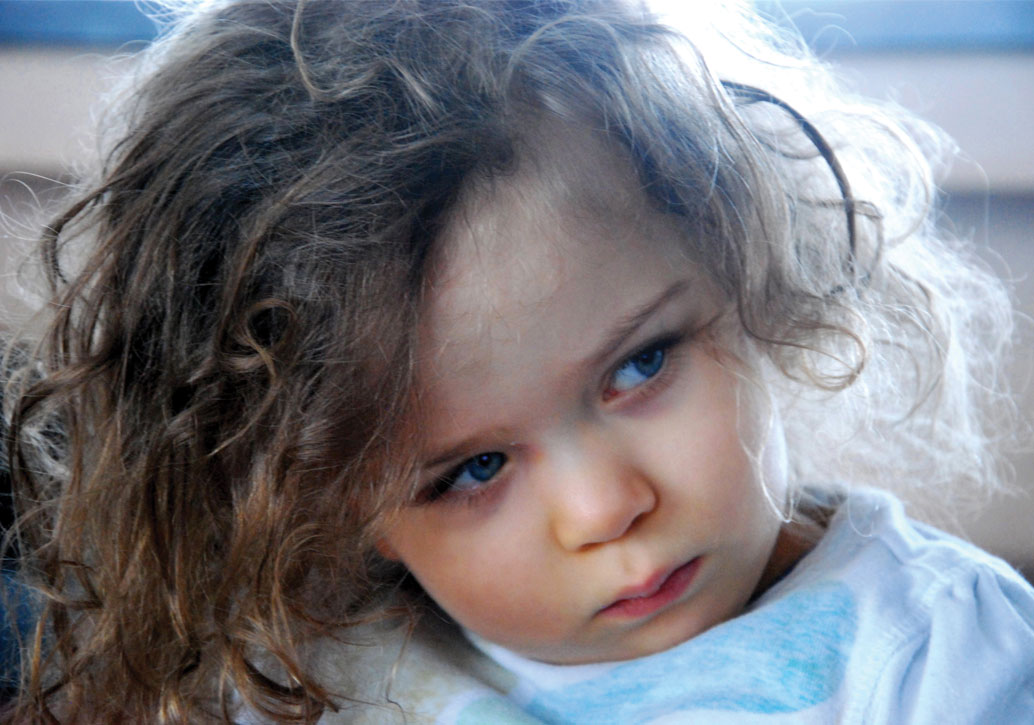 By Lucyna Mach with Michelle McClure

My daughter Zophia was born three months prematurely. She spent those missed three months at SickKids’ Neonatal Intensive Care Unit (NICU).  Early head scans showed bleeding in her brain, and we were later told she had level four cerebral palsy (with level five being the worst).  Her prognosis was grim.  The doctors were unsure how well—or even if—she could see.  They were certain, though, that she would be quadriplegic, with limited use of her arms and hands, and unable to walk.

Caring for Zophia
After a year of maternity leave, it became obvious that either my husband or I would need to stay home with Zophia in order to continue occupational and physiotherapy, take her to various appointments and provide her with one-on-one care. My husband has far better health benefits, so I quit my job.

As the parent of a child with special needs, I hear the expression “reaching his or her potential” a lot. I cannot imagine the frustration of parents with children who don’t have a diagnosis, but even when you do, no sane person should attempt to predict what those limits are. Every sound or movement is a joy. If you are given a grim prognosis, there is a risk of giving up early or altogether. If the future is painted too optimistically, you are at risk of feeling you are failing your child who doesn’t meet those often-unattainable goals.

Moving ahead
We were in the former category. So we are now really overjoyed with what our daughter can do.

By now, at almost four years of age, Zophia can roll over, commando crawl pretty fast, turn on the faucet and take off her glasses. She started drinking from a little espresso cup (no, no coffee yet) and can use a fork (better than a spoon). She can stand for a few seconds, sit for a few minutes and walk with support. Even though this may seem great to a lot of parents, she still totally relies on our assistance. She is not able to open a fridge or make a phone call for help if needed (she knows her address, name and phone number, but would physically not be able to get to the phone). She needs help with dressing, and with brushing her teeth and hair. In short, she physically depends on us.

Zophia compensates for her physical shortcomings with an amazing personality and intelligence.  She started speaking at eight months. She knows dozens of Canadian bird species, can point to most countries on the map, knows the majority of their capitals, has started to read, can count far beyond 100 and makes up her own songs.

The help we needed
Zophia needs help with her sitting, standing, walking, eating and bathing. With proper support, her life can be quite comfortable and even very enjoyable. But that support consists in part of adapted equipment. Unfortunately, there are very limited resources for finding furniture such as specialized tables and chairs. Yet, ironically, that’s what children like Zophia need most, as they spend most of their time in a sitting position. Federal funding for walkers is available but is capped low (if you get an expensive model), and most insurance coverage is inadequate.

Fortunately for us, Ability Online bridged that gap by funding my daughter’s otherwise financially unattainable everyday equipment. She loves her “Grillo” walker and the little ticking sound it makes with every step she takes. She calls it “grillo-ing”—and I call it regained hope that she may be able to walk independently, with aid, one day. She also got a Rifton chair, which is so versatile that she can use it at her little desk as well as at the dining table. It is on wheels so we can now restrict her wheelchair to just the outdoors.
It makes a huge difference not to have a perpetual trail of mud throughout the house.

Newfound friends
But there is more to this story. Having a child with special needs often isolates you from family and friends. While the funding for the equipment was critical for Zophia’s independence, perhaps more importantly, Ability Online helped me on another level. It introduced me to a new network of families with similar experiences. Pre-Ability Online, it was nearly impossible to find people like us. You meet some people at the hospital or at various institutions, but it’s a small circle: the other families and kids are sometimes in such different circumstances that it is hard to relate. We live in a rural community, for example, and there are only two other kids in wheelchairs, both have very different conditions from Zophia’s. You can’t escape comparisons, and those are often dangerous. Now we can plug into Ability Online forums to share information and get support from others in our situation, and can access information about useful resources.

Making life easier
Having a child with a disability is very different for everybody.  Some parents have a deep self-discovery of almost unlimited love and commitment, while others live in a state of a constant crisis. Some regret bringing their children into the world; others think those kids were God’s gift. Some get depressed, get divorced, resort to addiction, and some start charities, foundations and special programs.

As a parent, you often feel lonely, sometimes angry, almost always exhausted. It is a phenomenal feeling to meet people who feel similarly. I also cherish the fact that there is a little sympathy that replaces human connection.

I strongly believe that every NICU, every Early Intervention Centre, every paediatrician’s office and every special equipment vendor should inform parents of children with special needs about the availability of services such as Ability Online. It has made our lives so much easier because we know that we are not alone, and there is help out there if we need it.

Lucyna Mach is Zophia’s mother and Michelle McClure is the executive director of Ability Online.