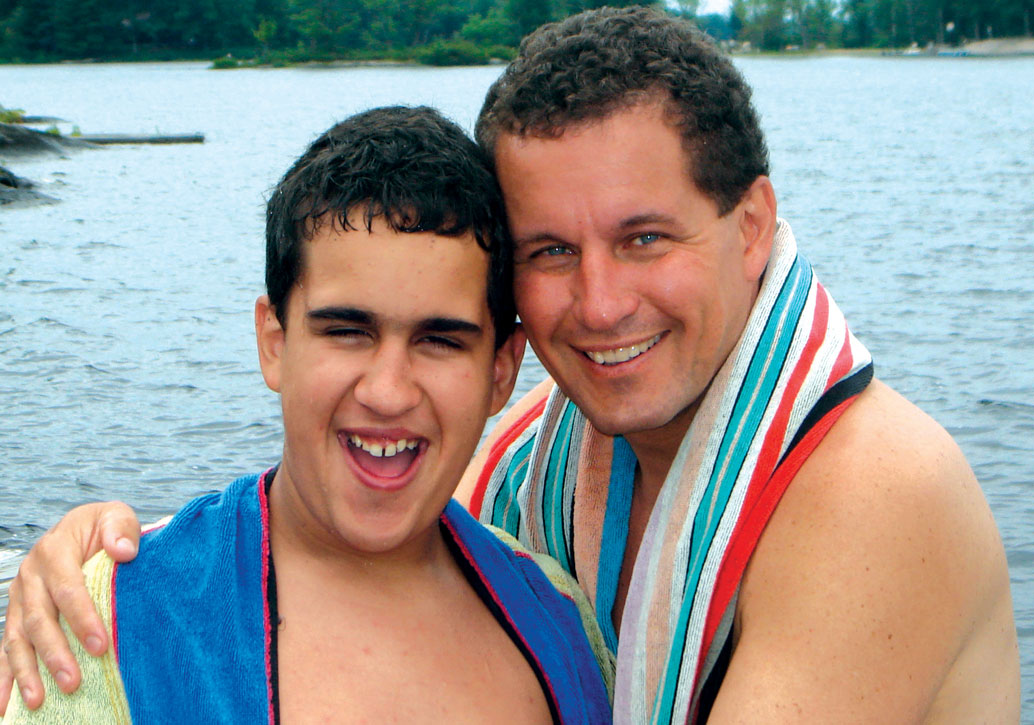 Our son Mitchell had two surgeries to repair his cleft lip before he turned five months old. I remember hoping that these were the worst things he had to go through as a child.

By Lori Beesley with Michelle McClure

I will never forget the moment our son was born. We expected to hear “It’s a boy” or “It’s a girl.” Instead, our doctor quietly, but with great urgency in her voice, told a nurse to get the paediatrician on duty right away. Then we heard, “Your son has a small birth defect.” I saw her put her finger into his misshapen mouth, heard her tell us he had a cleft lip but we should be very happy that his plate was intact. Happy about a birth defect? We were not.

All expectant parents hope their baby is born healthy—and really, that’s the expectation, isn’t it? In your heart, you don’t expect to deliver a baby that is less than perfect, even though in your mind you know it’s a possibility. There are plenty of statistics that say not all babies are born perfect, but you push those out of your mind and instead focus on the cute bedding, teddy bears and which stroller best fits your lifestyle.

Our son Mitchell had two surgeries to repair his cleft lip before he turned five months old. I remember hoping that these were the worst things he had to go through as a child. For months he wore a spacer, held in place with a strip of surgical tape in his nostrils to help form cartilage. People would look shocked when they peeked into the stroller, obviously uncomfortable with being confronted by something unexpected. Their reactions always took me by surprise; although I was aware of his facial difference, I did not define him by it. He was still Mitchell; he simply had to have some tape on his face while he healed.

Moving forward
At first, we tried to tell ourselves that the developmental delays we’d been noticing in him were the result of his surgeries, but soon we could no longer convince ourselves of that. We expressed that concern to our family doctor, who sent us to a paediatric neurologist. She told us he was in fact delayed—and our journey began.

After more than a year of tests and appointments, we still had no answers. As a last-ditch effort to discover a cause, we were sent to a geneticist, who performed a blood test. Six weeks later, we were told our son had an inherited genetic condition called Fragile X syndrome.  We’d never heard of this, but quickly learned as much as we could.

This syndrome is characterized by a defective gene on the X chromosome, which results in impairment since the gene blocks the production of a protein that helps healthy people learn everything in the normal way. The condition can exist silently for generations in families before it affects an individual, as was the case in our family. Fragile X is the most common inherited cause of developmental disability in the world. It is also the leading cause of autism, which Mitchell has. After I tested positive for being the carrier who passed on this condition, we learned that one in every 200 women is a carrier and runs a 50/50 chance of passing this on to future children. There are few physical traits, and it’s estimated that the majority of people who have Fragile X syndrome are still not diagnosed and are unaware that they have it.

We got the diagnosis two days after Mitchell’s second birthday. They told us he would always need special help in school, and might never read or write, go to college, drive a car, get married or have children of his own. Expectations were that he would never have a typical job and would have to live in a supported environment his entire life. They told us that his neurological disability is severe and lifelong, and that there is no cure. All of Mitchell’s physical, cognitive and basic daily living skills would be affected.

A lot of dreams died that day, and our lives changed forever. We were devastated, but at least we finally had an idea of what we were dealing with. Thus began our entry into the special needs world: Mitchell’s childhood was suddenly filled with various therapies and medical appointments. This time there was no simple surgery that could fix it. And this time, it took us a while to stop seeing the disability and see Mitchell. Now, his condition did define him in our eyes, at least for a while. But as the days passed, it occurred to us that Mitchell was the same child the day after the diagnosis as he had been the day before. He had not changed; we were the ones who needed to adjust—and fast. We jumped into this new stage of our lives with both feet, became his self-appointed advocates and learned as we went along.

Transition plans
Mitchell is now 18 years old and entering a new phase of life. He is legally leaving childhood, although he still loves Scooby-Doo and Thomas the Tank Engine. We’ve graduated from Child Services and entered the new world of Adult Services. He receives financial assistance from the government, but it’s only a small help compared to the support he requires. Both my husband and I work full-time and because we are nowhere close to retirement, Mitchell needs after-school care every day; he goes to day camp in the summer and school holidays. Last year, while others his age were looking for summer jobs and acceptance letters from universities, Mitchell could finally spell his last name aloud correctly. His most recent accomplishment was walking into Mr. Sub alone and ordering, while I waited outside in case he ran into any issues.

In Toronto, where we live, Mitchell is allowed to stay in school until he turns 21. What’s next for him? The lack of answers terrifies us. He’s on waiting lists for day programs, but we know those lists are many years long. When I think of what our lives will look like when he is forced to leave school in two short years, I feel physically ill and mentally overwhelmed. We know other families whose special needs kids are older, and see what they go through: schedules cobbled together from various programs and parents who are juggling all that. Their plans seem to us like a house of cards, never really secure: One small move could bring the whole thing crashing down.

Another astounding reality is the fact that most learning programs start at 9 a.m. and end at 3 in the afternoon. Where does that leave working parents who have adult children not capable of being trained to take public transit alone? To prepare, these days we spend a lot of time being as “plugged in” as possible. We attend workshops, have done his “life plan,” and make as many connections as we can. Great websites such as Ability Online (abilityonline.org) and Connectability.ca help a lot, but it’s still difficult to predict the future. So we will do what every special needs parent does…the best we can.

Being a special needs parent means our lives constitute a magnified version of life. The successes others take for granted are appreciated more in our household, since we have to work so much harder for ours. Mitchell’s cleft lip scar has now faded to the point of being almost invisible. But regardless of our circumstances and care arrangements, our family is a special needs family forever, and that is a constant that will never fade away.

Lori Beesley is Mitchell’s mother and Michelle McClure is the executive director of Ability Online.